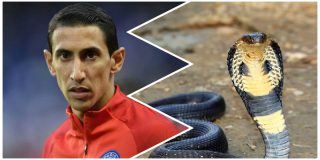 Paris Saint-Germain is hardly the easiest draw to get in the Champions League last 16.

They boast some of the best attacking players in the world – not including Angel Di Maria – and will be rubbing their hands at the thought of facing a side with zero confidence.

Thomas Tuchel knows his job is to deliver Champions League glory for the first time in PSG’s short history, and being knocked out to this United team would cause a major upset.

However, nobody is really thinking about that yet. There’s a long way to go as the Ligue 1 outfit enter their winter break, while United battle on through the cold, trying to make ground on the Premier League’s top four.

We had a scan through Twitter to see how Reds were reacting to the draw. Here are the best tweets.

Huh? Do City want to swap oppositions? Doubt it.

That put a lump in my throat…

United can actually pull out unlikely results when they line up to be dour against a top side. It’s when their opponents are coordinated and work as a unit that Mourinho can struggle to respond. PSG have the quality but maybe United will be able to frustrate them, individually.

It’s either that, or Mbappe and Neymar rock up a cricket scoreline against that defence.

PSG. Could be worse. We’re shite anyway so it doesn’t matter!

My immediate reaction to the draw.

You just know Mbappe & Neymar are getting nailed by Fellaini 😂 pic.twitter.com/8tspc9VSuK

Just like he did at Anfield on Sunday? NOT.

That’s one way to look at it.

The return of the snake 🐍👀

This one is for you, Di Maria.

That fucking snake Di Maria is scoring the goal that knocks us out at Old Trafford isn’t he? Most odious player we’ve ever had the club.

Don’t even joke about it…

Hope your ankles are ready you dirty snake @DiMaria pic.twitter.com/32bnxjOhsj

Ashley Young… You sure, mate?