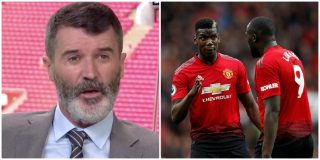 Roy Keane is in the Sky Sports studio today to assess the big game, Liverpool vs Manchester United.

As expected, the former United captain is pulling no punches, as he singled out two players for criticism while analysing the Old Trafford outfit’s situation ahead of the North West derby.

The Reds have had a difficult start to the season, underperforming along the way, with a potential defeat today leaving us 19 points adrift of the Scousers. Nobody saw that coming this season, especially not before Christmas…

Keane believes more is needed from the players, as he calls for their own personal pride to kick in and remember what crest they’re representing when stepping onto the pitch.

READ MORE: Liverpool vs Manchester United: Time to rally round

He mentions Paul Pogba and Romelu Lukaku, questioning their suitability to playing under a manager like Jose Mourinho.

Mourinho will undoubtedly question whether Keane would get better out of the pair if he was United manager.

And, the answer to that is probably no…

“At some stage, the players have to take responsibility.” 👊