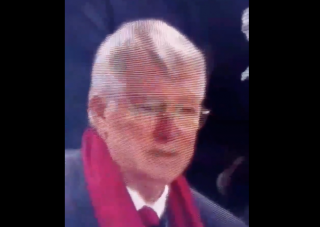 The boss suffered a brain haemorrhage back in May, as per The Telegraph, but battled through like everyone knew he would. It wouldn’t be like the Scot to shy away from a battle.

Though his fight and desire is what we missed at Anfield today as the Reds lost 3-1 at the hands of Premier League leaders Liverpool, who are currently 19 points clear of United, who now have to settle for a top four finish which won’t come easy.

Fergie watched the game alongside former club chief executive David Gill in the stands and like any United fan, he didn’t look too impressed by what he was seeing on the pitch.

The cameras caught Fergie shaking his head in disbelief as United put in an awful performance and were deserved losers on the day.

He wasn’t the only one…