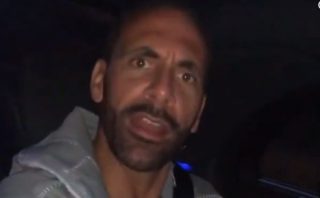 Talk about taking the biscuit.

Rio Ferdinand has always come across as a humorous individual, but he’s outdone himself today whilst predicting the outcome of Liverpool vs Manchester United.

As he attempted to send a rousing motivational message to the United players ahead of the North West derby, Ferdinand dropped a bombshell at the very end when it came to giving an actual prediction.

It looked as if he didn’t think about the game before hitting the record button, though perhaps it was a dig directed at how manager Jose Mourinho has United fans feeling at the moment. Flat and unsure of what United side will come out at kick-off.

Ferdinand has gone for a 1-1 draw – backing Mourinho to get a good result.

Though, let’s not be fooled. Most seasons you’d take a point from Anfield. It was just the manner of Ferdinand’s upload.