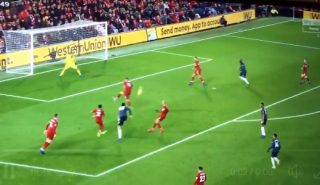 Marouane Fellaini burst into attack mode and lost the run of himself at the end of Sunday’s 3-1 defeat at the hands of Liverpool.

The Belgium international had a pop at goal and sent the ball miles wide behind the corner flag and knocking a steward off their seat in the process.

It pretty much sums Fellaini up as a player. A disaster waiting to happen.

Check out the video below. It perfectly sums up how bad we were today at Anfield, with the Reds falling 19 points adrift off league leaders Liverpool.

Fellaini’s half-time substitution proved ineffective as United had no idea from the first minute. That pretty much continued until the final whistle.

The uphill climb between now and the end of the season is a big one if we’ve any chance of finishing in the top four.