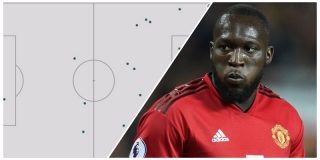 The Reds were truly awful against Liverpool but one observation you could take from the game is that Romelu Lukaku is just not finding his break at the moment and the fact he hit a new low at Anfield.

Many attributes of his game have worsened since last season, it looks like he’s gained too much muscle over the summer and goals aren’t coming his way.

It’s frustrating being a centre-forward and at United only the best is expected. If you’re not scoring each week, questions will come your way. We’ve built the highest standards in the past and it’s time to figure out a way to achieve those again.

Opta have provided a damning statistic showing Lukaku only touched the ball 20 times in the whole 90 minutes of United’s 3-1 defeat at Anfield. This rightly paints the Belgium international to be a laughing stock, but is it completely his fault?

“Sometimes his first touch is not the best and he loses balls in the first touch. Today, didn’t happen, he had some good link. I think he fought hard, I think he is improving, he played positively the last game against Fulham and today a very difficult match to play, I think he was positive.”

The graphic, pictured below, shows exactly where Lukaku touched the ball against Liverpool.

20 – Romelu Lukaku had just 20 touches for Manchester United at Anfield – never previously has he had fewer in a Premier League game that he played 90 minutes in. Stranded. pic.twitter.com/TO5d0Dzz0y

The service given to Lukaku is laughably limited. Yes, he touch can be atrocious at times, but he could facilitate that by providing more service. More times than not he will do something with it. I’m not defending the former Chelsea and Everton striker, but it’s unfair to point the finger at him when we played with an invisible midfield from the start.

Lukaku netted 27 times in all competitions and there is every chance he will get back to those heights or better. This is a difficult period; he’s playing in a team with zero confidence, mindful to the fact his current manager won’t be there very long, has conditioning issues since the World Cup, and isn’t scoring.

He wouldn’t be the first footballer at United to have a difficult season. We know he’s better than this.