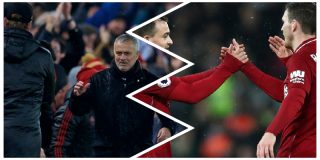 Everyone connected with Manchester United was left unimpressed by the team at Anfield on Sunday, but there was one Liverpool player who made a good impression on Jose Mourinho.

That player is Andy Robertson, Liverpool’s bargain signing left-back, who signed from Hull City in 2017 for £8 million, as per BBC Sport.

Although it wasn’t on show on Sunday evening, Robertson’s ability to cross the ball is second to none, as is his willing to get up and down the left flank. It’s no wonder how he’s become such an influential figure in Jurgen Klopp’s line-up.

For the fee paid, you would have to say he’s been one of the German’s best signings since arriving in 2015.

It says something when a rival manager comes out and passes positive judgement about an opposing player. Especially as Robertson doesn’t get the plaudits other Liverpool players receive in the media each week.

Paul Joyce, a journalist who covers Liverpool, quotes Mourinho below.

Is Robertson a mad dog, José?

Mourinho: “I am tired just from looking at Robertson. Absolutely incredible.”