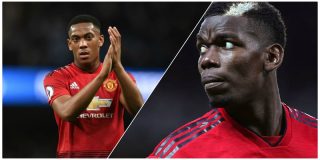 English football’s two most successful clubs meet for the 201st time as the Reds of Manchester and Merseyside lock horns in the midst of vastly contrasting seasons. Painfully, Jurgen Klopp’s side are unbeaten and top of the league, whilst Jose Mourinho has presided over a wretched season that sees us 16 points behind the men from Anfield, and in sixth place. Conversely, Jose has yet to lose to his German counterpart since he arrived at Old Trafford.

The boss is expected to make several changes for Sunday’s tie, and here is our predicted United line up.

Our undisputed number one was given a breather at Valencia in midweek and will be recalled for this one. It looks set to be a busy afternoon for Dave up against Liverpool’s potent attacking trio of Messrs Mo Salah, Bobby Firmino and Sadio Mane. He will have to be at his unbeatable best if he is to keep only his fourth clean sheet of the campaign.

Another whom began his evening on the bench in Spain, Young was presumably rested with this game in mind. With Matteo Darmian and Diogo Dalot injured, there aren’t many other options for Mourinho to go with at right-back. Young has been virtually an ever present all season and it doesn’t seem likely that he will be left out of this one by his boss.

United are again down to the bare bones at the back with Victor Lindelof injured, Marcos Rojo not match fit and Phil Jones busy stealing a living at the club. Please, please, do not play Jones for this. Chris Smalling is a slight upgrade and, although carrying a knock himself, is expected to start as he did not feature against Valencia. Mourinho’s line up in midweek gave several clues about his possible selection on Merseyside. Smalling will get the nod and could captain the side.

He did start at the Mestalla but, such are United’s paucity of options at the back, has to go in alongside Smalling here. Impressed on his return to the side against Arsenal following his long exile. His falling out with Mourinho has been well publicised and is well known, but if we are to have any chance of getting anything from the game, Bailly’s influence will be key

Another given the night off in the Champions League. Sat out Fulham as well and there have been rumours that Shaw will miss the tie at Anfield through injury, but I think that’s a smokescreen by Mourinho and that we’ll see the in-form full-back given the job of shackling Sadio Mane – no mean feat. Matteo Darmian could come in if Shaw does not make it, but the wantaway Italian is also thought to be an injury doubt.

Groan. The Serbian again. He has shown flashes of improved play of late, but is still a long, long way off the form that you can consider his best. There is no question that Matic will play at Anfield. You can never be entirely sure what the manager’s team will be from week to week, but you can be certain that Matic is in it.

The elephant in the room and the one big issue that just will not go away. Nevertheless, I think Mourinho has to play Pogba in this one. We saw what happened at the Etihad in the problematic Frenchman’s absence. Despite his flaws, he remains our most creative and forward thinking player. Marouane Fellaini will come in if Pogba doesn’t start, but that would be akin to waving the white flag.

Herrera has little in terms of match-winning quality but this is a game made for the combative Basque. Energetic and bursting with passion, Herrera must be horrible to play against. An expert in the needle, he can wind up his opposite numbers, get stuck in, and execute his full armoury of s**thousery to maximum effect. In a United side with not enough nasty f*****s in it, Herrera is the epitome of the kindred spirit we’ll need in this game. Anfield is not a place for the faint hearted on occasions such as this and he will be key.

Mourinho has already confirmed that Jesse will start in this game after he was held back against Valencia in readiness for Anfield. Came on as a sub and changed the game, Lingard is another to bring energy and pressing to the table in a team that doesn’t do enough of either. Lingard will start wide on the right but could drop a bit deeper depending on how things go. He will look to link the play and dovetail with Herrera and Rashford throughout. Juan Mata – who entered Red folklore with his 2015 heroics in this fixture – is set to be on the bench.

Lukaku was, to put it bluntly, absolutely useless against Valencia, and not for the first time this season either. I would say he shouldn’t be starting here, but with Anthony Martial an injury doubt, there’s no one else. It also seems highly unlikely that Mourinho would drop his £75m man for a game of this magnitude. Lukaku is a firm favourite of the Portuguese, and – like Matic – no matter how bad his form he gets in the team. He will need a much, much better performance here if United are to have a chance. Martial’s injury-enforced absence is a massive blow for United. Lukaku missed a sitter in the corresponding fixture here last season.

Rashford was another player that Mourinho confirmed will start against the Scousers. Excellent against Saints and Arsenal, two goals in successive games with Fulham and in Wednesday’s defeat to Valencia, he is a man in fine fettle. Has responded to Mourinho’s outburst at him during the Young Boys win in the best possible way. Rashford will look to cut in off the left and cause problems for a Liverpool side hit by injuries to Trent Alexander – Arnold, Joel Matip and Joe Gomez. His pace against what could be a somewhat makeshift back line will be United’s main asset here. Scored twice against Liverpool in our win over them at Old Trafford in a man of the match performance back in March.