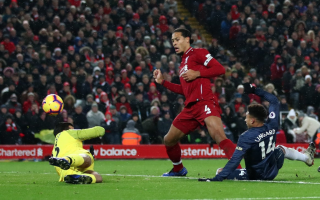 Whoever is working on Manchester United’s Twitter account today popped a funny joke at Liverpool goalkeeper Alisson Becker following his howler which saw Jesse Lingard equalise against the Scousers before half-time.

A draw today would mean Liverpool won’t go back to the top of the table, a place currently occupied by champions Manchester City.

The away side will be the happier outfit at half-time as Liverpool dominated much of the first half, though United were awake to punish an awful mistake.

Hopefully, we can nick something in the second half and come away with an important win but we need to be much better.