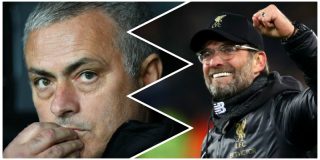 This Sunday sees English football most decorated football rivalry write its next chapter when Manchester United travel to Anfield to face our arch-rivals, Liverpool. Both sides are coming off contrasting results where Liverpool won 1-0 over Napoli to take them into the next phase of the Champions League, whereas Manchester United had already qualified with a game to spare fell 2-1 to Valencia in a performance that drew much ire for players and the manager not to mention the fans.

A fixture that always draws the attention both domestically and internationally but over the last few years has had several damp squibs after days of media hype. Will it change this weekend and erupt with goals aplenty? No, because neither team can really afford a loss, with Liverpool chasing the title and also United trying to rescue their season and get into the top 4.

Liverpool were prolific last season but this season with Virgil Van Dijk in his first full season as well as Brazilian keeper Alisson they have fixed their Achilles Heel in defence. Jurgen Klopp has sacrificed their explosiveness from last season for a more solid approach and it has paid dividends as they are still unbeaten in the league and currently sit on top of the table. This is a thought that sends shudders through any a United fans spine and has everyone’s worst nightmare possibly become a reality.

Ironically with all the pressure on Jose Mourinho to be more expansive in his play whilst being Manchester United manager, he has not lost to this free-scoring Liverpool side with 3 draws and 1 win in the two previous seasons. His pragmatism in this fixture has actually served him well as this is a fixture that United cannot lose, fans will actually want Jose to ‘Park the Bus’ if it means walking out of Anfield Sunday evening with a point or better.

For fans of Manchester United, this is the first game you look for on the calendar, it is a game that has always mattered most to us. Roles have been flipped over the decades with each team being dominant and each team being the underdogs, but the passion and rivalries from the fans keep this fixture being the biggest in England.

I, as a United fan, don’t want Liverpool to win a coin toss let alone a title so seeing them up there on the top of the table fills me with a genuine sense of dread. It has come to something when United fans would rather Manchester City win the league than Liverpool but if you understand anything about football or spend five minutes on Football Twitter you will understand why.

This is the worst part of the week for me when both clubs have played their fixtures and the media and in particularly Sky cranks up their coverage with wall to wall adverts, features and segments featuring fans/ex-players of both teams. All they hype makes this worse as you can’t seem to escape it, no matter where you are someone will be talking about this game and if you are a fan of either then Sunday afternoon seems an eternity away.

So, when it comes to 3pm on Sunday and the team sheets come in and a collective scream of why is he playing? Etc, we need to remember that on Sunday there should be no agenda’s, no Mourinho in/out or anything trending on social media. We have to come together behind the team and the manager regardless of any animosity towards a player or Jose. Differences and cliques should be cast aside as the only thing that matters on Sunday is Liverpool, this is the biggest game of the season and all fans know a Liverpool fan or see them on Social Media and know how bad it will be if we lose to them come Sunday night/Monday morning. No fan should want us to lose on Sunday to either prove a point or to get Mourinho out of the club, if this is your view then I don’t think you are a real Manchester United fan.

When Liverpool dominated during the 70/80’s United were a perennial cup team but when it came to Liverpool games United always fought and often upset them as it was our biggest game of the year. Also, when we were winning all trophies under Sir Alex it was still the game you wanted to win most regardless of what trophy you ended up with at the end of the year.

So, player/manager allegiances aside we have to make sure that we don’t lose at Anfield, for anyone who says this is not the kind of ambition the club should show or an indictment of where we are as a club. It is the one fixture of the season where If you offered all United fans a draw at Anfield then they would take it. My father can’t even watch the game at Anfield on TV because he gets too worked up because he can’t stand the ‘cheating’ where they get all the decisions. I am sure this is similar for Liverpool fans coming to Old Trafford but for Sunday I honestly don’t care who plays or how they play whether they win or stink out the place for a draw. If we lose then not only, we will not hear the end of it we might never hear the end of it if they go on to win the league. So for one game let Jose do his thing as he might not be for everyone but Liverpool fans hate him after all he has done at Anfield over the years so Jose do your thing and do what you need to on Sunday as if we get beat I might start looking at a cave or private island to relocate to with no internet in case they win the league.