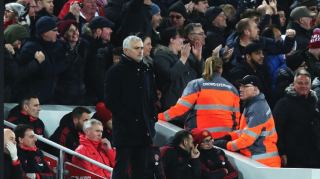 No Mourinho tactical trump this time…

In fact, Liverpool fans were so satisfied with the result, they’ve even asked Manchester United not to sack Jose Mourinho as manager.

We were bad. Really f**king bad. So bad that Liverpool fans had a laugh at the end, signing “Don’t sack Mourinho,” as picked up by respected football journalist Henry Winter.

It’s no secret that they don’t like Mourinho or United, so there’s a feeling among their support that the longer he remains in charge at Old Trafford, the more we suffer.

Liverpool toyed with United towards the end and dominated throughout the game, though it was the substitutions from both managers that had a telling effect on the game.

Jurgen Klopp’s decision to bring on Xherdan Shaqiri proved to be a masterstroke as the Swiss attacker scored two deflected goals to make it 3-1. Mourinho brought on Marouane Fellaini, who did very little, and left it too late to bring on Anthony Martial and Juan Mata.

Paul Pogba was left on the bench.