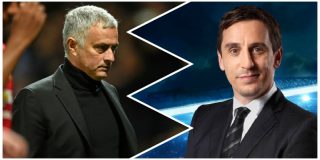 Manchester United legend and Sky Sports pundit Gary Neville has blasted the club’s board for their naivety to prematurely offer Jose Mourinho a new contract at the club last season.

Of course, Mourinho won the Europa League and League Cup during his first season in charge, as well as finishing second in the Premier League the following campaign, but United are no closer to taking back their Premier League title.

Instead we’re being overtaken by rivals such as Manchester City, Liverpool, Chelsea, Tottenham and Arsenal, who all play more attractive football than we aspire to.

Neville has decided to take a swipe at our incoherent board.

“The board are so naive, giving him (Mourinho) a new contract,” Neville told Sky Sports, as quoted by the Manchester Evening News.

“Manchester United need to reset. It’s not just the manager, it’s deeper than that. They lost control of the football club when they gave him a contract extension 18 months in.”

Mourinho was doing an OK job at United, but the club jumped way too quick to offer him a new deal. It makes you wonder who comes up with these decisions?

And, there should be someone in place to give these decisions a second thought. United – the biggest club in the world, as we know it – is being run by a bunch of businessmen now. They’re ace at getting in sponsorship deals and opening spreadsheets, but they haven’t a clue when it comes to what really matters.

We are a long way off. Starting January, or even now, it’s time for a re-think. Take Ed Woodward away from football duties, scout a new manager and hope the Glazers get the f**k out!