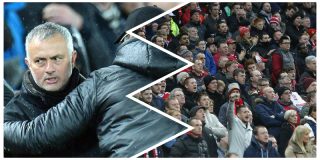 These are sad times for Manchester United. The team looks completely depleted, the board is full of greed and we’re 19 points off Premier League leaders Liverpool.

On Sunday, the Reds were below par against Jurgen Klopp’s men, and were second best in every department. We conceded 36 shots against a side brave enough to get men forward, advancing through the gears and creating opportunities.

It genuinely pains me to hand them any praise, but we’re just so far off the pace.

As previously mentioned, the gap of 19 points between the Scousers and ourselves is the furthest they’ve been ahead for 46 years, according to The Sportsman.

It has also been pointed out by @TheSportsman on Twitter that United are closer in terms of points (17) to Fulham, sat at the bottom of the Premier League, than they are to Liverpool at the top.

😂 Man Utd are closer to Fulham in the league than they are Liverpool.

This is truly unacceptable for any United side, especially as we approach the halfway point of the season, without any sense of change.

We face a challenging uphill climb and José is still at the wheel.