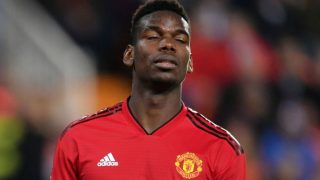 Jose Mourinho has announced his Manchester United line-up to face Liverpool at Anfield.

The Scousers are unbeaten this season and a win today will see them overtake champions Manchester City at the top of the Premier League table.

United, on the other hand, have had a woeful season thus far. Mourinho’s men are positioned sixth and a defeat will see them fall 19 points adrift of Liverpool.

While a draw at Anfield is always considered a good result, United have fallen so far behind and can’t really afford to drop more points if our aim is to get into the top four places.

🔟 changes to the #MUFC starting line-up for #LIVMUN…

With a total of 10 changes to the team, the biggest talking point will be Mourinho’s decision to drop Paul Pogba to the bench, however, nobody should be surprised after his performance against Valencia on Wednesday night. He’s a luxury player and is likely to be handed a chance from the bench.

Romelu Lukaku is the only player to keep his place from Wednesday night’s team. We will be looking for a big performance from the Belgian today, but also from everyone else, as it will take a hard graft to get the result we need from Anfield.

Edit: Smalling drops out of the line-up and has been replaced by Eric Bailly.