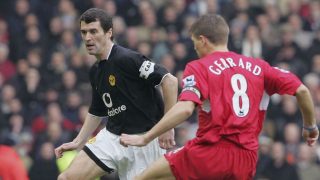 Only after leaving his position as assistant manager to Martin O’Neill for the Republic of Ireland, Roy Keane is set to make his return to football punditry this weekend, when he joins former Liverpool duo Graeme Souness and Jamie Carragher in the Sky Sports studio for coverage of Liverpool v Manchester United.

It all turned sour for the Ireland under O’Neill and Keane’s stewardship, as results worsened and unrest flooded the squad, though United fans will reflect fondly on the Corkman’s 12-years at Old Trafford. During that time he won seven Premier League titles, four FA Cups and the Champions League.

Keane was a leader. A fantastic captain and the sort of player every manager would like to have in their dressing room. Sadly, since his exit for Celtic in 2005, United have not had a true leader in the middle, willing to give other players a kick up the arse when they’re underperforming.

Sir Alex Ferguson knew he was his equivalent on the pitch as far as leadership was concerned, but the Scot decided when it was time for Keane to move on from Old Trafford. As per usual, it ended in sour circumstances, allegedly triggered by the Irish midfielder going on a rant after United lost to Middlesborough, as relived by Balls.ie.

Keane is likely to cast his views on the future of United manager José Mourinho and, given he has been a critic of the Portuguese tactician in recent years, we doubt he will hold back much.

Considering he is now unemployed, you’d imagine Sky Sports and BT Sport have went head-to-head to book Keane’s analytical services, though it now looks like Sky have won that race.

Hopefully Keane gets an appearance on Monday Night Football soon.