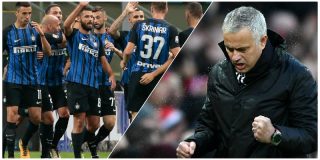 It feels like Manchester United are at an unwanted crossroad.

Jose Mourinho will keep his job until Champions League football is mathematically unreachable for next season, but the squad needs new signings, particularly in defence.

But attention is now firmly on 23-year-old Skriniar of Inter Milan. According to Calciomercato, the Italian giants will have to potentially raise up to €50 million by June to stick by Financial Fair Play regulations, which could see a key player sacrificed as a result.

READ MORE: Roy Keane will be in the Sky Sports studio for Liverpool v Man Utd

Inter were eliminated from the Champions League this week following an underwhelming home draw with PSV Eindhoven. That result meant Tottenham had done enough to reach the Round of 16.

If the Serie A outfit are forced into telling Skriniar, it could be of real interest to Manchester United, Barcelona and Real Madrid, with the Express suggesting that all three clubs are keen to sign the Slovakia international.

Football Italia have previously stated that Skriniar is valued in excess of €75 million by his current employers, though if they’re desperate to gather funds for FFP, the Nerazzurri may not be in a position to play hard ball.

All you need to do is look at United’s list of defenders to notice the lack of quality available to Mourinho. Phil Jones and Chris Smalling have had enough chances down the years and just aren’t good enough. Argentina international, Marcos Rojo, is allowed to leave the club in January should United’s valuation be matched, as per ESPN, and the jury is still out on Victor Lindelof and Eric Bailly.

The Reds have a shocking defensive record this season – conceding 26 goals in 16 Premier League matches. That has undoubtedly contributed to their struggles as they are positioned sixth in the league, a total of six points off the top four.

Skriniar is certainly a player we would like to see sign for United, but the race for his signature could easily result in a bidding war.