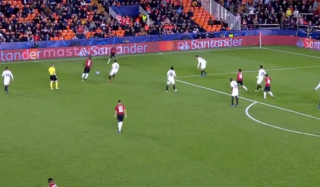 Marcus Rashford has pulled one back for Manchester United against Valencia.

The Reds currently trail 2-1, with the La Liga outfit far better on the night.

Marcus Rashford came on as a second half substitute while the scoreline was 2-0, and it is his header that puts United back into the game.

However, time is running out and it doesn’t look like we have much of a chance of winning the game.

In the other Group H game, Young Boys are beating Juventus, therefore, a win tonight would have seen United top the group.

Jose Mourinho will be disappointed by the performance – but at least United still go into the Round of 16 and Rashford has got his name on the scoresheet for a second consecutive game.

We would have expected more…