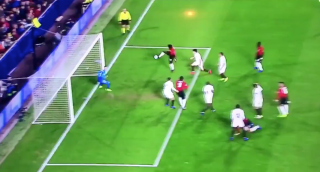 Manchester United had a glorious chance to equalise against Valencia before half-time, but Paul Pogba blew his golden opportunity.

The Frenchman was put back into the line-up tonight with the possibility of proving his worth ahead of Sunday’s trip to Anfield.

Liverpool are currently on top of the league and United should do their utmost to spoil their premature parade, and Pogba should want to be part of that.

The chance came after Marouane Fellaini headed down a corner inside the box, only for Pogba to send his effort towards the side-netting.

Meanwhile, Young Boys are currently beating Juventus 1-0 in the other Group H match.

Watch the chance below. He really should have buried that opportunity — it was easier to score than it was to miss.

Is he playing for Manchester United or for Juventus?!?! pic.twitter.com/uD8bvYmHFO