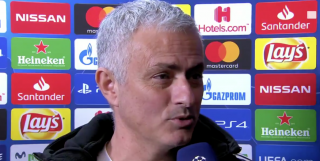 Manchester United lost 2-1 at the Mestella but manager Jose Mourinho was still able to crack a joke in his post-match interview on BT Sport.

The Reds were far too passive in the first-half and made it easy for Valencia to press, whereas our intensity was non-existent.

Mourinho must now pick his team up ahead of a difficult trip to Liverpool on Sunday. When asked about the game, the boss replied, as quoted by the Manchester Evening News:

“This is not about Liverpool today, this is about Champions League, I don’t know why you bring Liverpool into it. Manchester United supporters know we go into every match with intention to win, the intention is always the same.”

Though that wasn’t evident from the start against Valencia, Mourinho knows deep down his players need a big performance to get the result we need against the Scousers.

Anyhow, Mourinho didn’t appear too downbeat. He was able to have a laugh after the match – but not sure most of us are, after watching that doss…

It has us asking who or what the real joke is…

Yep, that’s how own goals work 😂