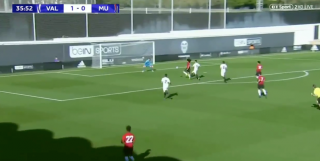 It was a good afternoon in Spain for Nicky Butt’s young side as Manchester United’s U19s record a fifth UEFA Youth League victory in six games this season by coming from behind and beating Valencia 2-1.

Valencia opened the scoring thanks to Jordi, but Nishan Burkart was quick to equalise before Aidan Barlow netted the winner prior to half-time.

The Reds went into the game as group winners, but Butt still went with a side capable of finishing strongly, as United picked up another three points. Hopefully the first team do a similar job later and show the trip wasn’t made to top up the tan before Christmas, though we’re sure some of the travelling fans have made the most of it.

A highlight from the game came in the second-half when Shola Shoretire become the youngest (14) Manchester United player ever to play in an official youth cup/league match and the youngest to participate in the UEFA Youth League.

What a remarkable milestone for the kid, and hopefully we see more of his development in the coming years. Angel Gomes was quick to give Shola credit on Twitter after the match.

2-1 win to finish the group unbeaten. Great result! Also a massive shout out to all the debutants and 14 yr old Shola making his debut 🙌🏽❤ @ManUtd