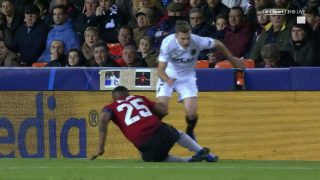 Antonio Valencia was booked early on against Valencia at the Mestalla.

Los Che left-back Toni Lato was on the receiving end of Valencia’s challenge and required medical attention as a result.

Thankfully, the Spaniard was able to carry on after returning to the field of play.

Valencia received a yellow card for the late lunch, though some may be of the view he deserved a straight red.

However, that would have been harsh. He was late but his studs weren’t shown and the referee would hardly describe the lunge as careless.

The scoreline is currently in Valencia’s favour after Carlos Soler opening the scoring.

See the late tackle below and let us know if you think the referee got it right?

Only a yellow for Antonio, lucky to still be on the pitch #mufc pic.twitter.com/DtVkvlclmT