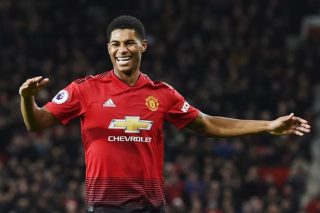 The closer we get to the January transfer window, the quicker the rumour mill does the rounds, with the latest sprinkle of speculation linking Manchester United youth team graduate Marcus Rashford with a move to Italy.

He will have to brush up on his Italian to make such a move worthwhile, or bide his time at United knowing he’s too good of a player not to be at Old Trafford. Rashford may not be at the top of Mourinho’s list of priorities and it would be daft to think the next manager won’t think differently.

Last weekend against Fulham a rejuvenated Rashford ended an eight match goal drought by banging in United’s fourth and final goal in a convincing 4-1 win. The three points were enough to lift United from eight to sixth in the Premier League table.

However, if you believe everything you read (we don’t), Rashers could be leaving the Red of Manchester in a matter of weeks. Italian media outlet Gazzetta dello Sport claim AC Milan have targeted Rashford as a backup option after failing to bring back Zlatan Ibrahimovic.

The thoughts of losing Rashford are certainly disappointing. His game has not quite developed how many imagined, but he’s still only 21-years-old with many years left to build on his game. It would be a massive shame for that to happen elsewhere.

For instance, in the Premier League this season, Rashford has scored three goals with five assists, as per WhoScored. By no means is that a bad record — he’s still contributing — but it’s only right to demand more from a player who has been a first team regular for the past few seasons.

It’s not difficult to have patience for Rashford. We can all see the incredible player trying to hatch out of his shell and it may take another manager to achieve that.

From Wythenshawe, Rashford has been at United since the age of seven. His future should be at Old Trafford. No ifs, buts or maybes about it!