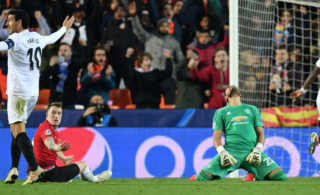 There is no getting beyond what a terrible night it was for Manchester United.

Yeah, we had already booked our place in the Round of 16, but the performance against Valencia won’t fill any fan with optimism.

Several players – including Fred and Andreas Pereira – were handed a start to show their worth. They failed to do so and with a trip to Liverpool scheduled for Sunday, why was that the case?

These squad members should have put in an extra shift to give Jose Mourinho a selection headache ahead of that match, but those two in particular are miles off the pace.

READ MORE: (Watch) Rashford pulls one back for Man Utd with brilliant header

Another player who has been picked out for a terrible mistake is Phil Jones. It was his own goal and lack of communication with defensive partner, Eric Bailly, that saw Valencia double their lead.

Marcus Rashford’s late goal wasn’t enough to force a comeback win, which would have seen United top Group H, therefore, be a stronger position ahead of the last 16 draw on Monday, December 17.

Jones has been getting a bit of stick on Twitter as a result. He had a rough night and was involved in both Valencia goals.

A Phil Jones own goal from outside the box makes it 2-0 to Valencia… pic.twitter.com/Mm0PHRmq47

1 – Phil Jones is the first Manchester United player to score an own goal during a Champions League match since Phil Jones also did so back in November 2011 v Benfica. Calamity. #VALMUN

Remember him being “tipped as a future England captain” all those years ago which, as we all know deep down, is footballese for “quite big for his age”

Oh my word, stop whatever you do and go and watch that Phil Jones own goal right this second hahahahaha

Phil Jones now has four own goals for Manchester United.

Only two players in the club’s history have scored more. pic.twitter.com/YWSm6sGEGn

That Phil Jones own goal summed up as a pic… pic.twitter.com/uqvnQY1Nzj