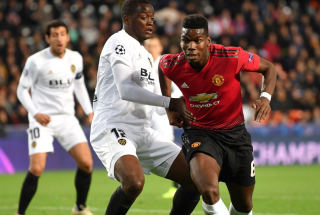 Despite a woeful display at the Mestella, Manchester United have reached the knockout phase for this year’s UEFA Champions League.

We knew that much before tonight’s 2-1 defeat at the hands of Valencia, however, a win for United would have seen Jose Mourinho’s men top Group H with Young Boys beating Juventus in Switzerland.

Now, the last 16 stage of Europe’s most prestigious tournament is on the horizon.

The draw for the Round of 16 will take place on Monday, December 17 in Nyon, Switzerland, and Stretty News will be providing updates on whoever United come up against…

READ MORE: (Watch) Rashford pulls one back for Man Utd with brilliant header

Clubs can expect the first round of fixtures to be played from February 12-20 and then the second legs will take place between March 5-13.

There’s not many teams there we fancy United beating at this rate, but Mourinho will hope they can rise to the occasion.

Tonight the occasion meant less but there wasn’t any fight or character shown in our performance. It was all very flat and things need to improve quickly.