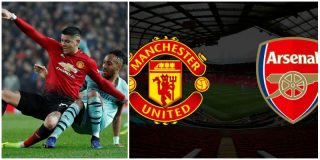 Perhaps it’s the way Mark Ogden worded it for ESPN, but Eric Bailly a replacement for Rob Holding? The Ivory Coast international is much better than the Arsenal centre-back.

Give me a one-legged Bailly over Holding any day…

Holding is expected to be out for the rest of the season after doing his cruciate during the 2-2 draw against United at Old Trafford a week ago, and it is now believed that Unai Emery is prepared to dive into the transfer market for defensive reinforcements.

Bailly’s future at United is an uncertain one. It is no secret that he has fallen down manager José Mourinho’s pecking order at the club, with Chris Smalling and Victor Lindelof often preferred at centre-back this season.

Radio broadcaster talkSPORT went as far to claim Bailly has become “unhappy” with life at United having fallen out with the manager.

Following his transfer from Villarreal in June 2016, Bailly made a big impact during his first season at Old Trafford. Mourinho has just took the manager’s job and we won the Europa League as well as the League Cup.

Arsenal boss Emery is already aware of Bailly’s ability from managing in Spain. The defender had spells at Espanyol and Villarreal when the Spaniard was in charge at Sevilla.

Whatever about Rojo, it would be a mistake to see Bailly to a domestic rival. Mourinho should be looking to make him a first team regular instead.