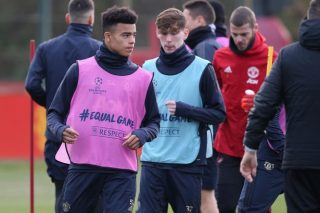 You may write off Manchester United’s Champions League clash with Valencia as a nothing fixture – The Reds have qualified for the Champions League knockout stages and Los Che already know they will be dropping out and into the Europa League.

Though a United win at the Mestalla along with Juventus somehow failing to beat Young Boys in Switzerland would see José Mourinho’s men qualify for the Round of 16 as group winners.

However, that is unlikely and Mourinho is bound to rest a number of his main players with one eye on Sunday’s trip to Anfield.

Mourinho allowed two reserve players to train at Carrington on Tuesday morning before flying out to Valencia. Mason Greenwood and James Garner could now be in line to feature on Wednesday night.

According to Manchester Evening News, Greenwood has 17 goals in 16 games at youth level this season. A truly remarkable stat and the sign of a goalscorer.

No wonder Reds are keen for him to get a run out in Spain.

Start greenwood in place of lukaku

Valencia tomorrow we’ve qualified already, Jose should give greenwood his debut just to be able to say it was him..

MORE ON THIS STORY: Caught Offside have ran a report on both Greenwood and Garner being in line for their first team debuts against Valencia.