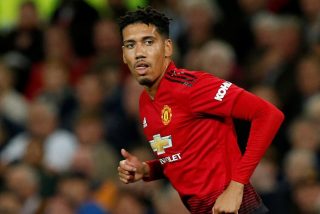 According the Daily Mail, the 29-year-old suffered a hairline fracture to a bone in his left foot during United’s win over Young Boys last month and has been taking painkilling injections to play recent matches against Arsenal and Fulham – after missing the 2-2 draw with Southampton.

It is obviously far from ideal for any footballer to be taking painkilling injections and hopefully a rest on Wednesday night will help Smalling’s recovery process.

The report states: “Smalling was unable to even put on a shoe or trainer for a week owing to the swelling after suffering the injury against Young Boys.”

Jose Mourinho, a manager who wants players who will go to war for him, will admire Smalling’s courage to play through injury, but is it good for the player long-term? No, probably not.

Sky Sports have already claimed that Smalling is in fresh talks with United over a new contract, so his long-term future is likely to be at Old Trafford. (Unlike Mourinho, who doesn’t really stay at clubs beyond the three-year milestone, so he hardly cares about the condition of players he will be leaving)

The England international limped off before the hour mark on Saturday against Fulham and had to be replaced by Marcos Rojo, and now there’s a good chance he will be rested along with other first team members on Wednesday night.

Mourinho will look to protect a number of players before United’s trip to Anfield this weekend. It may be a chance for Eric Bailly and Paul Pogba to prove their worth to the manager and get their names back into the starting team for Liverpool away.