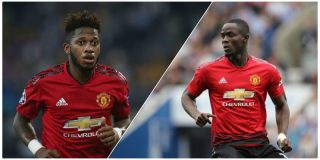 We have a feeling Jose Mourinho will field Paul Pogba and Romelu Lukaku against Valencia to give both players a chance to prove their worth after an underwhelming start to the season.

Chris Smalling will miss the game with a fractured good, as per the Daily Mail.

The game itself is a nothing tie with Manchester United already qualified for the UEFA Champions League and Valencia having secured a Europa League spot.

Mourinho should use this game as an opportunity to play Fred, who as a new signing has been vastly underused, despite costing the club £52 million, according to Goal. Pogba also needs to work his way back into the team and show he’s ready to put the team first rather than himself.

READ MORE: Disappointment as Man Utd have only one player featured in 50-man shortlist for Team of the Year

Our defence will be made up of fringe players, though it should also present a chance for Eric Bailly and Marcos Rojo to force their way back into Mourinho’s regular line-up. The Ivorian particularly deserves this…

Sergio Romero has never let United down and deserves an appearance.

Would this XI have enough to do a job on Valencia, who are also likely to field a weakened team?