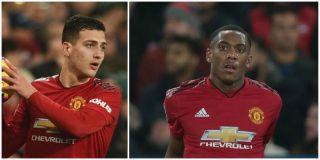 Manchester United have begun preparations for Wednesday night’s away tie against Valencia in the UEFA Champions League.

The Reds have already secured a place in the knockout stages of the competition, with Valencia dropping into the Europa League, making the fixture a bit of a nothing tie.

However, manager Jose Mourinho is likely to field a couple of fringe players to hand them all an opportunity to work their way back into his plans for the rest of the season.

The Christmas period is a busy one and it’s important to have as many players fit possible.

READ MORE: Disappointment as Man Utd have only one player featured in 50-man shortlist for Team of the Year

Mourinho is due to speak to the media later today in Valencia, where he is expected to give an injury update on his squad.

While we went with Darmian in our predicted line-up to face Valencia, none of the rest featured. Hopefully, Martial returns in time to face Liverpool on Sunday.