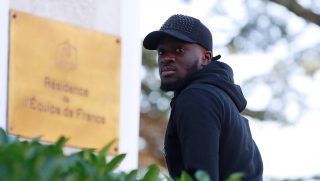 Manchester United are one of a number of teams to have been linked with a move for Lyon sensation Tanguy Ndombele.

Ndombele, 21, has a whopping £90 million transfer valuation hanging over his head after seeing his loan move to Lyon turned into a permanent switch this past summer. He has since made 57 appearances for the French club since then.

The Lyon midfielder is renowned for his precise passing, driving his side forward and possessing a real creative spark.

With all of the talk on United needing centre-halves, we must not forget about midfield where an aged Nemanja Matic is relied upon each week. And, spending a similar amount of money on Paul Pogba in 2016 has proven not to be enough to fix the problem.

The Mirror, citing France Football, claim that the Reds have joined Barcelona, Manchester City and Tottenham in the race to sign Ndombele, though they add that Lyon could demand up to £90 million for his signature.

There has been nothing reported to suggest any of these clubs agree with Lyon’s alleged valuation of Ndombele but, like any club, they will try get the maximum out of any outgoing transfer.

The Mirror claim United are currently leading the race to sign Ndombele, but let’s hope there are plans to play the lad should he sign, unlike Fred who cost a lot and hardly plays. There’s even a growing concern that United only signed the Brazilian because City wanted him…

Pogba recently lost his place in the team, with Mourinho opting for a midfield trio of Nemanja Matic, Ander Herrera and Marouane Fellaini. There’s definitely room for a bit of class.