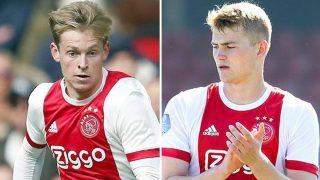 Former Manchester United scout Derek Langley has opened a can of worms on the club after naming three high-profile players who were scouted but not signed.

It is no secret that United’s recruitment process is below bar – when it comes to players as well as managers – and Langley’s comments certainly don’t reflect well on the club or executive vice-chairman Ed Woodward.

He says United had scouted Matthijs de Ligt a number of times but Woodward and other board members opted not to make a move for the centre-back, who would be a massive upgrade on most of the defenders we already have at the club. Langley even adds that fellow Ajax star Frenkie de Jong was also on United’s radar.

READ MORE: Man Utd train without five stars ahead of trip to Valencia

Langley, who was head of youth player recruitment for 16-years until July 2016, says Dayot Upamecano was another player rejected by the hierarchy.

“Frenkie de Jong and all these players now are sort of around Europe. Dayot Upamecano, who is now at Red Bull Leipzig, was another.

“This was one of the reasons why I had a meeting with Ed Woodward and I told him that I wasn’t convinced with the competency of certain people at the club.

“I told Ed Woodward quite straight: ‘If you think I’m going to sit here and just tell you what you want to hear, I’m not that man because I’m going to tell you exactly how I see it.’

“I think it was possibly part of my downfall as to why seven months down the line I was removed because I wouldn’t tow the line in relation to telling them exactly what I thought.

“It’s one of them things in football – you come to accept it. Manchester United thanked me for the time I spent there and the players I’d taken in, but ultimately we could have been so much better if people had listened.”

This goes to show how the club lost so many of its football people and is being run by finance experts, who wouldn’t know a football if one slapped them into the face…

Both of the Ajax youngsters have shown incredible development in recent years and are not being monitored by some of the biggest clubs in European football. United should have snapped them both up before their popularity has risen.

Fair play to Langley for speaking out.