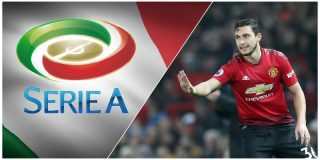 Matteo Darmian has only made three appearances in the Premier League this season.

According to The Sun, the Italian has attracted interest from clubs like Juventus, Napoli, Inter Milan and Roma, and we feel it would make perfect sense to cash in on the full-back considering he gets little playing time under manager Jose Mourinho.

Darmian has failed to make much of an impact since joining United in 2015. What looked like a good signing from the beginning turned out to be a disappointment.

United have had their problems at right-back in recent times, playing Antonio Valencia and Ashley Young in the position, therefore leaving Darmian on the fringes of the team. That is enough to suggest Mourinho doesn’t rate the former Torino defender.

READ MORE: The end for Paul Pogba at Man Utd?

Without naming which Italian club he’d like to join, Darmian has now fuelled speculation over his future by admitting he misses the Serie A.

“I must say, I really do miss Serie A and Italy now,” Darmian told Gazzetta dello Sport, as translated by The Sun.

“I know that I am at one of the best clubs in the world and I am proud to be at Manchester United, but I do miss Italy. I love my country.”

Nobody can blame Darmian for wanting a move back to Italy, though none of these clubs fought hard enough for his signature in the summer, which has us thinking whether he would be a starting player elsewhere?

He’s hardly good enough to get into the Juventus time…

The problem at United is the board will only allow such a transfer if the money meets their demands, despite thinking long-term about the player’s wages when he’s not even getting game time. Darmian’s salary should be considered dead money to the suits at Old Trafford.