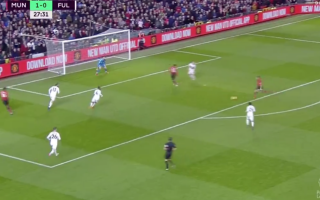 Juan Mata finished off a fine team move from Man United this afternoon as the Spaniard gave the Red Devils a 2-0 lead in their clash against Fulham.

The goal came after Marcus Rashford was played in down United’s left hand side, with the forward squaring the ball to Mata on the edge of the box, who cooly slotted home to double the home side’s advantage.

It was a great team move all round from United, and it’s put them in great shape to collect all three points from the game against Claudio Ranieri’s side.

Great ball from lukaku and finish from mata…C’mon United !!#MUNFUL