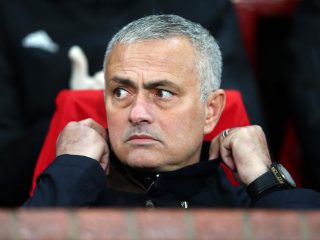 The last thing José Mourinho needs right now is a headache over injuries ahead of a busy Christmas period.

Pressure is mounting on the Portuguese tactician to turn his spell as Manchester United manager around, with reports mounting that the club will consider paying approximately £40 million to make Mauricio Pochettino the next manager at Old Trafford, as per The Sun.

Unfortunately for the under pressure boss, there are concerns over at least four players missing out on Saturday’s Premier League encounter with Fulham through injuries — not including Victor Lindelof and Alexis Sanchez, both of whom have been ruled out for longer than the others.

Phil Jones, Chris Smalling, Eric Bailly and Anthony Martial all remain doubtful to make the game, as noted by the Manchester Evening News from Mourinho’s press conference on Friday morning. He said today’s training session will give him more of an idea over their availability.

“I don’t know,” Mourinho told the press. “Training session, 11 o’clock will give us some answers – Smalling, Jones, Martial, Bailly. Of course Lindelof and Alexis, we don’t even speak about them but we need answers and for sure we are going to play with players not in the maximum of their potential.”

Sounds like Mourinho is getting his excuses in early.

Whether or not United have players at their maximum, whoever is available should be more than capable of putting in a shift to secure three points against a struggling Fulham side. We’ve been dreadful this season and the team has been underperforming, prompting even more questions over Mourinho’s future.

Of course, this may inflict a defensive headache for the United manager, and nobody wants to see a defence consisting of Nemanja Matic and Scott McTominay again. Right?

Martial would be a big loss, however, given his form this season has been exceptional.

United are desperate to avoid dropping more points after going winless in their past four games. The midweek draw with Arsenal at Old Trafford means Mourinho’s men are currently eight points adrift of the top four, a truly unacceptable stat for any United team.