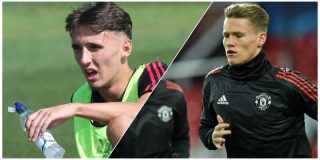 Although Scott McTominay is not a first team regular, the Scotland international has led by example to pass on some valuable advice, according to Manchester United U23s midfielder Callum Whelan.

Jose Mourinho awarded McTominay the ‘Manager’s Player of the Year’ last season because it would have been “unacceptable” that the youngster went home empty handed, as per The Independent.

Now, the 21-year-old can use his influence in the first team to help some of the youth players make the grade, even though the Scot hasn’t kicked on or shown he’s quite good enough for Manchester United.

The below tweet by John O’Kane hits the nail on the head re: McTominay.

Mctom is an honest young player who should be in the championship but he’s being guided by a manager who is a dead man walking and doesn’t give a sh&t its not his fault he’s being picked, if the so called “quality players” had his desire the team would be alot better #MUFC https://t.co/m2pml4HZI7

Moreover, it’s nice to hear some of the younger lads are willing to listen to McTominay as he’s got the experience they all should eagerly seek.

“I’ve lived with Scott for four or five years, so he gets me eating right and working hard,” Whelan told the official Manchester United website. “He’s just great because he’s been here since he was eight and, looking where he is now, it’s where you want to be. He’s helped me out a lot.

“It’s a tough pathway [to the first team] but, if you work hard enough, like Scott has, it’s there. You’ll get your rewards and be there like Scott. He tells me to work hard every day, eat well, rest, recover. If you give it your best, then who knows what happens?”

When asked about cooking, the 20-year-old revealed: “It’s all green, the foot that Scott cooks! I can’t cook yet and he’s just started so, at the minute, it’s just fish and greens [that McTominay cooks].

“He’s a nice guy and he’s also a lot funnier than people see. We get on well and he’s great to live with.”

Whelan, who usually sits in front of the defence for the U23s, is in action tonight for United’s Premier League 2 clash, at home to Middlesborough at Leigh Sports Village. Kick-off is scheduled for 7pm and entry is free.