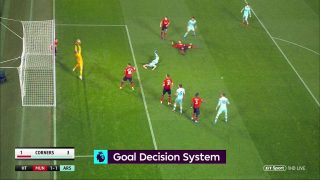 Manchester United were held to a 2-2 draw against Arsenal at Old Trafford on Wednesday night. The game saw lots of drama, a decent atmosphere, but really lacked in quality. We pick out three negatives from the game.

You can find our three positives from United’s showdown with Arsenal here.

United started the game on the front foot and pressed with intensity. It’s not something fans are used to seeing under Jose Mourinho, so it came as a welcome change to the rubbish we’ve been subject to of late. However, with Nemanja Matic as the central piece in midfield, it was only a matter of time before the tempo dropped, which allowed Arsenal into the game shortly before their opening goal.

Matic has his critics. Over the past year, the Serbia international has gone from being a good signing to a terrible piece of business. He turned 30 in August and looks to have lost any bit of pace he’s had, as well as adopting the mobility of an elephant. The former Chelsea midfielder doesn’t get the ball forward quick enough, and United would look a lot better with a deep-lying playmaker, capable of carrying out defensive duties with enough technical quality to see a forward pass. It would be so much easier if he could clone a younger Michael Carrick.

It’s December 6. Manchester United have now played 15 Premier League games – currently four without a win – and are 18 points behind rivals Manchester City. Last season, we finished runners up to City, 19 points adrift, so things have certainly got worse.

This is pretty much the same group of players as last season. While Mourinho may moan about the transfer targets he didn’t get, last night he didn’t even bother to put his new midfielder signing on the bench, after costing the club £52 million, as per the Telegraph, with Fred becoming United’s fourth most expensive player.

You see Liverpool making ground. Even if they don’t win the league, they’re still sticking to City better than we did a year ago, actually forming a title race, and if they suffer a slump at least Jurgen Klopp knows his job is safe and that the club will back him to strengthen again. Such progress is not being felt at Old Trafford.

The fact that last night’s result and performance (lacking in quality) cheered some Reds up was telling. Anything other than a win at home to Arsenal isn’t good enough, and don’t for one second think we’re ready to match most of the teams above us in the table…

It’s December 6. We are eight points off a Champions League place. We even have a negative goal difference. And, as Miguel Delaney wrote in an article for the Independent: “This, again, is December. This, again, is Manchester United.”

You could argue all of the goals last night were easily avoidable. The standard of defending was shocking at times, and a rare mistake by David de Gea saw Arsenal take the lead. He allowed the ball to bounce out of his grasp and despite Ander Herrera’s best efforts, the Gunners had their goal confirmed by goal line technology. Another individual error saw Arsenal take advantage in the second half when Marcos Rojo lost the ball after trying to beta his man inside United’s half. This saw Alexandre Lacazette going one-on-one with De Gea, before Rojo got back onto his feet to make a last ditch table. Unfortunately the ball still trickled into the net.