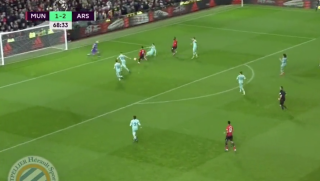 Arsenal took the lead for a second time at Old Trafford tonight but Manchester United responded perfectly yet again.

Fans hardly had a chance to take their seat again with Jesse Lingard scoring just 13 seconds after Arsenal second goal.

The scoreline is currently 2-2, with United equalising for a second time on the night.

This match lacked quality in the first-half and both of these goals came from defensive mistakes.

Alexandre Lacazette may try to claim Arsenal’s second, but the ball took a heavy touch before crossing the line.

Then, for Lingard’s goal, United got numbers forward once play resumed and took advantage of a scrappy Arsenal defence.

He hasn’t scored in a while…

Watch both goals below.