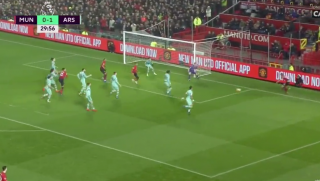 Manchester United went behind after 25 minutes at Old Trafford but quickly pulled one back.

A horrific mistake by David de Gea gave Arsenal the lead with what was a soft goal to concede after a decent start.

It put United behind and could have saw the lads face an uphill climb to get back into the game, not something these players aren’t used to, which showed as Martial equalised.

De Gea rarely makes a mistake, so we don’t want to go too hard on him, but he clearly paid the price for what appears to be a drop in concentration after Mustafi’s header.

United started with great intensity though allowed Arsenal back into the game shortly before the opening goal was scored.

Martial’s equaliser came after a free-kick as Arsenal were unable to clear the ball. It is vital that United continue to kick on and punish the Gunners when opportunities arise.

A defeat tonight will pile even more pressure on manager Jose Mourinho, who is losing the faith of the supporters.

Then, United reacted quickly as Anthony Martial equalised inside a full box.

Watch the equaliser below.