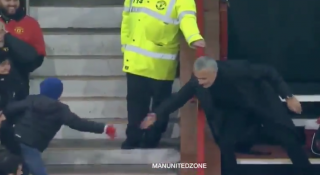 After allegedly kicking out at the wall by his dugout, Mourinho glanced across to his right where he spotted a young fan, presumably bemused with the manager’s most recent outburst.

Though credit to Mourinho for seeing the funny side and reaching out towards the youngster with a smile on his face to shake hands.

United equalised twice tonight to take a point from the game, thanks to goals from Anthony Martial and Jesse Lingard.

Unfortunately for Martial, the Frenchman had to come off in the second half after suffering a knock. He was then replaced by Romelu Lukaku.

Shame we couldn’t take all three points. Both goals conceded were avoidable.

Love this from Jose 😂 🤝 #mufc pic.twitter.com/pRJmvQ5Wfx