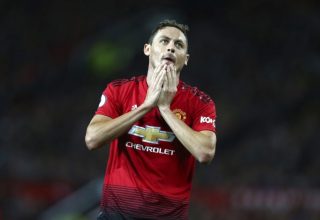 The Serbia international has been criticised regularly since the 2018/19 season began, but tonight saw arguably his best performance of the campaign. Matic has not performed at his previous levels and there are growing fears within the fanbase that his best days are past him.

Drawing with Arsenal leaves us 10 points outside the top four and 18 points behind Premier League leaders Manchester City. That’s truly unacceptable 15 games into the season.

Manager Jose Mourinho called upon some players who haven’t played regularly of late, while new signing Fred didn’t even make the bench.

READ MORE: Mourinho: We drew 2-2, but we scored four goals

Portuguese youngster Diogo Dalot marked his first Premier League start with an impressive display, filling United fans with optimism about the team’s future at right back, whilst Marcos Rojo put in a hearty performance to make his first start of the season, even if some point to Arsenal’s second as an own goal for the Argentina international.

Matic spoke to BT Sport after the game, expressing his belief that United deserved all three points in what was an entertaining game.

“It was open,” said Matic, as quoted by Red Rants. “We attacked, both teams did. I thought it was a great game for the supporters. I think they enjoyed this game. Unlucky for us that we couldn’t score that third one. I think that we deserved.

“Everyone knows that the confidence isn’t high, but I think we showed great character tonight and this is the way we have to fight until the end of the season.”

We can related with Matic being disappointed. There was a feeling before the game that Arsenal should walk all over United tonight, however, that should never be the case at Old Trafford. The lads put up a good fight and were the better side throughout.

Still, though, the game lacked quality and you can take from that what you will.