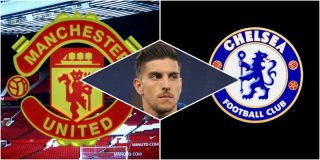 It sounds like Manchester United will have stiff competition in their pursuit to sign Roma midfielder Lorenzo Pellegrini.

But now Il Messaggero claim Maurizio Sarri is keen on bringing Pellegrini to Chelsea, proposing a battle between the two Premier League clubs for the Italian midfield operator’s signature.

Pellegrini, who continues to impress in the Serie A, has been heavily linked with a move to Old Trafford, though this is the first instance that we’ve seen another English club reported to be keen.

READ MORE: El-Hadji Diouf wishes he had joined Man Utd over Liverpool in 2002

Jose Mourinho certainly needs reinforcements in midfield, but what’s the point in signing his targets if there is a good chance of him getting the axe before next season?

Pellegrini’s agent, Pocetta, may be happy to take United’s cash but he should have concern for his client given the lack of football new signing Fred has got this season, after costing United a whopping £52 million, as per The Telegraph.

However, Sarri apparently shares similar admiration for the 22-year-old. He knows Chelsea face the prospect of losing Mateo Kovacic in the summer unless they can agree on a deal with Real Madrid over a permanent transfer.

Losing Kovacic would surely see Chelsea in the market for a new midfielder.