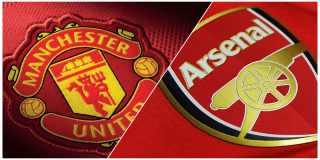 Jose Mourinho has named his starting eleven to face Arsenal as Manchester United look to bounce back after settling for a draw against Southampton last weekend.

The Gunners go into the game full of confidence after a convincing win over North London rivals Tottenham, which saw in-form Pierre-Emerick Aubameyang net a hat-trick and Lucas Torreira top off an excellent performance with a goal.

Stretty News will provide you with updates throughout the night and views will also be expressed on the SN Twitter account.

Mourinho was unwilling to update Manchester United’s official broadcaster MUTV on injuries or which players have become available for the Arsenal clash, as reported by Goal, so no clues were given prior to the team’s announcement.

“I don’t want to update you,” a stroppy Mourinho told MUTV.

“I would like Arsenal TV to ask the same questions but they don’t, they hide everything from the inside, so why should I answer to you?”

The team announced to start against Arsenal has been shared on United’s official Twitter account (@ManUtd), as seen below:

It is with great relief that Eric Bailly is back in the team tonight, though much of the talk will surround Jose Mourinho’s decision to bench both Paul Pogba and Romelu Lukaku. Tonight will also mark Diogo Dalot’s first start in the Premier League.

Here’s how #MUFC line up for #MUNARS…

Head to our official app for minute-by-minute updates: https://t.co/5Ab1IkVQX3 pic.twitter.com/ba9vFNN61H

Defeat tonight should inflict serious pressure onto Mourinho’s shoulders again as United’s season has been nothing short of unacceptable so far. The Reds are losing touch of a top four finish, though three points could see our fortunes change and put Arsenal back a step or two.

Jose in @ManUtd programme: “This is a game we want to win. To have the best chance of that we have to remember the saying ‘simplicity is genius’.

Recommended: This Arsenal side can bring spark back to Old Trafford; could work in Man Utd’s favour