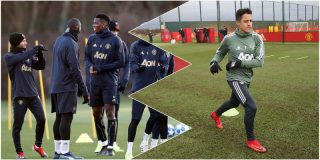 Alexis Sanchez has had a nightmare since joining Manchester United a little under a year ago. Now reports from The Independent claim the Chile international was beaten by Juan Mata in a routine speed drill during a recent training session.

And, Juan Mata is by no means quick. His technical brilliance is what separates him from the rest, though we’ve rarely seen the Spaniard beat a man for pace.

In the space of 12 months, Sanchez has gone from being recognised as one of the Premier League’s best players to one people feel sorry for. How can such a talented player reach rock bottom so quickly?

Well, his final few months at Arsenal hardly coated him in glory, and United thought a player of his calibre was worth the risk.

This really suggests that Sanchez is in decline – losing enough pace to be beaten by Mata in the race, so perhaps it’s unfair to blame manager Jose Mourinho for the former Barcelona man’s shortcomings in a Red shirt?

This may have come as a result of being burnt out during his days at Arsenal, where he was relied upon to carry a mediocre side to unachievable heights. He was certainly a more reliable player than the sulking German, Mesut Ozil, who they’d persuade you into thinking is the assist master.

So good he’s hardly had a look in under new manager Unai Emery.

However, Arsenal had the last laugh with Sanchez. They got the best out of him and got rid of him from their wage books as soon as he declined. United are now left to pick up the pieces, which ultimately sums up a club lacking any sense of direction.

Sanchez is unlikely to play again this year after sustaining a muscular injury, as per talkSPORT, therefore, he will miss tonight’s clash against his former club.