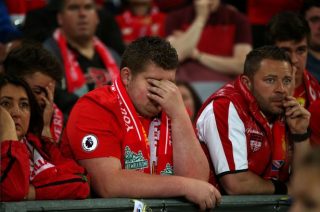 El-Hadji Diouf says he regrets signing for Liverpool and that he wishes he had joined Manchester United or Barcelona instead.

Diouf signed for Liverpool in 2002 for a fee worth £10 million, as noted at the time by The Guardian, after a number of impressive performances at the World Cup that summer.

However, the Senegalese forward never quite lived up to the hype and always fancied himself a bit too much.

It didn’t work out as planned at Anfield and Diouf would later be sent on loan to Bolton Wanderers, where he would go on to join permanently.

READ MORE: Mourinho praises investment made by Everton but says Man Utd will finish above Toffees

Speaking on RMC Sport’s Footisme show, as quoted by Sport Witness, Diouf admits the shirt he regrets wearing the most was Liverpool’s, and that he would have signed for Barcelona or United if he could go back in time.

“I can say today that the shirt that I regret wearing the most was Liverpool’s, because if I were to do that part of my career again, I would have gone to FC Barcelona or Manchester United.

“At the time, they wanted me too.”

Considering Diouf made over 80 appearances for Liverpool and scored just six goals, I think Sir Alex Ferguson would be saying something similar had he joined us instead.

Though perhaps we can complement Diouf on previously calling out both Steven Gerrard and Jamie Carragher, as per The Independent, because he never quite saw eye-to-eye with the Scouse duo.

This won’t go down well in Merseyside but it gave us a laugh.