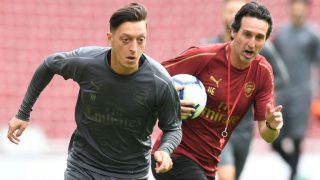 It looks like Arsenal will be without Mesut Ozil again for Wednesday night’s Premier League trip to Old Trafford.

However, none of Arsenal’s social media rule out the German for the game, though it’s unlikely that he will feature after missing the North London derby with a reported back injury, as per the Evening Standard.

Ozil may be one of the bigger names in Unai Emery’s squad, but the new Arsenal boss has urged the former Real Madrid star to fight for his future, as per The Sun.

Emery was asked about Ozil’s fitness ahead of the match: “Today he was working alone, I don’t know if he’s OK for Wednesday,” said the Arsenal boss, as per Manchester Evening News.

“I said yesterday he’s had backache since last Tuesday. He couldn’t play in Kiev or yesterday [Sunday].

“At the moment, I don’t know if he can play in Manchester.”

It’s no secret that Ozil has failed to reach previous heights under Emery and The Guardian have even linked with the German with a move to Serie A giants Inter Milan.

When a new manager comes in and attempts to make a statement, it’s usually easy to identify which players are going to try work their way into his plans, and it doesn’t sound like Ozil has responded to Emery in such a way.

Jose Mourinho was one of a few managers to get the best out of Ozil during their time together in Madrid. He will know the player’s key attributes better than most should he get a surprise inclusion in Arsenal’s line-up, though if he’s not fit enough for training it’s not likely we’ll see him at Old Trafford on Wednesday night.

Whether Ozil is in form or not, I’d rather play Arsenal without him in their team. He’s still capable of providing brilliance and hurting this flat United side.

He has faced United competitively 11 times throughout his career, scoring two goals and creating as many assists.