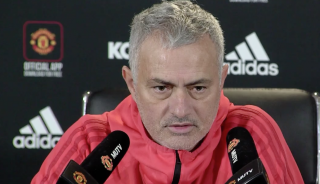 Jose Mourinho spoke to the press on Tuesday morning, ahead of Manchester United’s home fixture against Arsenal in the Premier League.

United’s position in the league table was questioned and Mourinho admitted seventh place is not acceptable for a club like United. He also praised Everton for investing well and improving, but still thinks the Reds will finish above them in the table.

Mourinho has also gone from suggesting United will be in the top four by Christmas to claiming he needs his players to perform better in order to close the gap between United and the likes of Tottenham and Arsenal.

“I think Manchester United seventh place I can agree, in spite of the investment Everton made was phenomenal and obviously there was a great improvement in that team from last season in relation to this but I don’t think Everton will be in front of Manchester United at the end of the season,” Mourinho said during his press conference, as quoted by Manchester Evening News.

“There are six teams that should stay in the first six positions, season after season two of these teams are staying outside the top four. For example last season was Arsenal and Chelsea.

“And this season two of these six are going to stay outside. Who is the best team of the six, the team with more potential, less potential, who is the team performing not so well? These will be around the questions and answers. At the end of the season the top six will be done by the six teams we all know have that responsibility to finish in the top six.”

Mourinho was quoted on Saturday as saying United need a miracle to finish in the top four. A journalist asked the United boss if that was an accurate assessment?

“I what? Nah. Is not, I don’t know if I say or if I didn’t but if I used that word is not what I feel at all,” he continued. “We have like eight or nine points from fourth — something like that. I don’t think we need a miracle at all.

“We need a good run of results, not waste points we shouldn’t waste. Last week before Crystal Palace game I told my hopes and targets were end of December to be in that position, the target changed but in the sense let’s try to close the distance best we can and be very close to those positions.

A defeat against Arsenal will make a top four finish incredibly difficult. United will then find themselves in a battle for Europa League qualification.

That, in December, is unacceptable for a club of United’s size, though Mourinho won’t take responsibility for that. He never does and would rather cast blame on his players or the club’s investment.

It could be a long week for United…