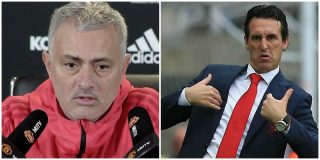 The press were hoping he would take a swipe at Arsene Wenger.

Jose Mourinho was careful not to fall into a trap during Tuesday morning’s press conference.

Arsenal are showing improvements under Unai Emery and have gone on an impressive 19-game unbeaten run ahead of Wednesday night’s visit to Old Trafford.

This will show what character their players have after beating rivals Tottenham 4-2 on Sunday. If they can pick up six points from those two games, with half the battle already complete, it should pure fire into the bellies of Arsenal fans, with fans hopeful of a successful debut season for the former Paris Saint-Germain and Sevilla coach.

However, there are many differences to this side than what we seen from Arsenal under Arsene Wenger as the Frenchman’s managerial career nosedived.

Against Spurs, the Gunners showed more bite than usual and genuinely wanted every second ball more than their opponents. They didn’t look as soft, though only United teams of old would provide a real test to that.

Mourinho was clever when asked about the differences this Arsenal side pose under Emery. He didn’t get dragged into the minor details, as it would be have surely been portrayed as a dig at Wenger, and he has more matters on his plate at the moment.

“Yes, is different,” Mourinho admitted, as per Manchester Evening News.

“It’s not for me to do that analysis, I have my opinion but keep for myself, different yes, and a very difficult match for us because we are going to play against a good team in a good moment without accumulation of matches because they are playing Europa League and when you play Europa League you normally play with second choices and give good rest to the players. We have to play to the max and is accumulation of matches and then you arrive in this moment in December and many teams pay the price of that.