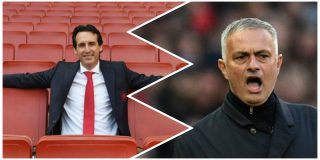 Watching Arsenal and Manchester United this season, you’d be forgiven for thinking that it was Jose Mourinho, not Unai Emery, who is new to the job of taking a fading force back to former glories.

Emery’s appointment raised eyebrows when he was named as Arsene Wenger’s successor – it was a left field choice that few saw coming, such was the clamour for Messrs Massimiliano Allegri, Thomas Tuchel or long-time favourite Mikel Arteta among other. It just goes to show that sometimes you don’t need the biggest of managerial heavyweights in your corner to mastermind a complete reversal of fortunes.

But whilst Mourinho’s United tenure lurches from one unacceptable calamity to another, Emery has quietly gone about his business in north London. Five months into his debut season in English football, and he’s already had more of an impact on Arsenal than Mourinho’s had on United in three years.

Whilst United’s identity is impossible to detect and almost non-existent, as suggested by Stretty News columnist Paul Rowles here, the Gunners’ has never been clearer. A high-pressing team with a bundle of pace, energy and guile, I’ve been impressed with what I’ve seen from Emery’s in-form and upwardly mobile side.

Unbeaten in 19, they come to Old Trafford on Wednesday as favourites for the win for the first time in a long while. Emery has hit the ground running, so much so that’s he almost dispelled the myth that managers need time. He’s also shown that you don’t need to spend a small fortune as Mourinho has done.

Emery signed five players during his first transfer window at Arsenal, bringing in Bernd Leno, Sokratis (don’t ask me to try and spell his surname), Stephan Lichsteiner, Matteo Guendouzi and Lucas Torreira, an absolute steal at £26.5m, as per The Guardian. He’s infused his transfers with the fearlessness of youth, instilled a winning mentality already with an eye-catching style of football – to impressive effect. When you see what Emery has done at Arsenal in a few short months, then there really can be no excuses for Mourinho’s failings.

RECOMMENDED: This Arsenal side can bring spark back to Old Trafford; could work in Man Utd’s favour

There’s a long way to go of course, but I’d much rather have him in the United dugout than a successful but no longer relevant manager who is living off past glories, a man who continues to shirk all responsibility and an arrogant t**t who takes United fans as absolute mugs. Two-and-a-bit years into the tenure of the man who was meant to re-awaken a sleeping giant, Mourinho has only contrived to oversee the worst season in Manchester United’s recent history.

With confidence and belief coursing through the veins of every one of his players, Emery has already put his stamp on an Arsenal team that was in desperate need of rejuvenation. It’s not his squad, he’s had one transfer window and arrived on a wave of pessimism following the depressing final season of Wenger. In contrast, Mourinho continues to scratch around to find any semblance of a winning formula. This United side are a jumbled and incoherent rabble, a team of strangers, square pegs rammed into round holes assembled at an exorbitant cost of over £500m.

If it was his first season with an inherited squad, then fair enough, but a reminder again that this is his third. How can a manager new to the league at one of the biggest clubs in the country come in and turn them around straight away, whilst Mourinho – a winner who has spent nine years of his career on these shores – fails so miserably with a team that he should have indisputably made his own? United are merely a burnt out shell of their former selves whilst Arsenal haven’t lost since the second week of the campaign.

I’m not looking forward to Wednesday. Emery has never beaten Mourinho in four managerial meetings but will never have a better chance than he will this time around. It could get ugly and almost certainly won’t be pleasant.

The two men are taking their sides in completely the opposite direction.