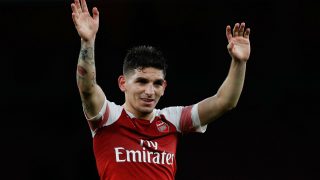 Next up for Manchester United is Arsenal at Old Trafford on Wednesday night.

The Gunners are currently positioned fourth in the Premier League, level on points with rivals Spurs in fifth, who they beat 4-2 at The Emirates on Sunday.

In what was a derby that lived up to expectations, Arsenal battled in a manner they had forgotten how to under Arsene Wenger, and there is a sense that Unai Emery is working towards something those players have lacked for years.

It has been a long time since I haven’t fancied United against Arsenal. Emery doesn’t seem to be a pushover like Wenger became in his later years and Jose Mourinho will be aware of that.

The midfield battle is key and that is one area Arsenal made sure they won in the battle against Spurs. They simply wanted it more and it was a bad day in the office for Mauricio Pochettino’s men.

However, one player getting plenty of praise following Arsenal’s memorable win over Spurs is Lucas Torreira. He’s been labelled a ‘midfield terrier’ after his performance but has quickly warned his teammates not to be complacent on Wednesday.

“Today it was a great opportunity [for Arsenal in the battle for the top four],” said Torreira, as per The Metro. We manager to win this game that was important for us as a team and for the fans.

“Now the game against Manchester [United] is coming. It will be against a direct rival because Manchester are behind us in the table.

“We have many goals this season. We are playing in several competitions and we are doing it in the best possible way. And the important thing is to continue growing as a team.

“They are going to play at home, with a lot of fans and we know that all the matches in this championship are different and very difficult.”

If Mourinho puts out a similar team to the one he announced against Southampton, Torreira and his teammates have nothing to worry about…