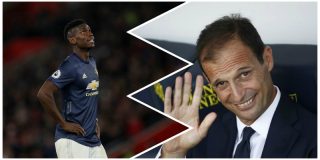 Paul Pogba’s pathetic display at the weekend reportedly resulted in the Frenchman being told off by manager Jose Mourinho. According to the Daily Record, the midfielder was branded a ‘virus’ for disrespecting his teammates and the travelling support at St. Mary’s.

The World Cup-winner couldn’t even muscle up a performance against a struggling side near the relegation zone. Southampton are in such a mess at the moment they announced the sacking of manager Mark Hughes this morning, as per BBC Sport (it must be unacceptable to draw with United at home nowadays).

The reported friction between Mourinho and Pogba didn’t take long to make its way to Italy, where Turin based newspaper Tuttosport, according to Sport Witness, published a series of articles over the weekend with the focus being on the midfielder returning to Juventus.

They’ve gone the extra mile to ask agents with no involvement in Pogba’s business what they think about a potential deal. SW pulled a quote from Mattia de Sciglio’s agent Donato Orgnoni: “He [Pogba] could come back, but I wonder: then who will leave to make space?”

It is clear from this that Tuttosport are pushing the potential transfer. They clearly want it to happen and are showing no shyness in that regard.

Perhaps if the Turin based media watched Pogba closely each week they wouldn’t seem so desperate for him to go back because he has been woeful.

At this rate he wouldn’t be missed at United.